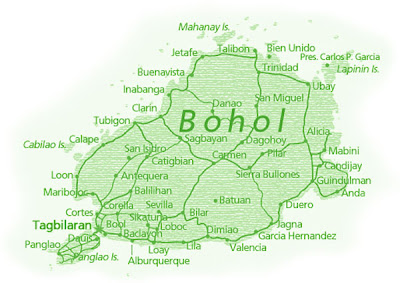 Bohol, in the heart of Central Visayas, is the 10th largest island in the Philippines (See inset Figure 1 encircled in red). It is comprised of 48 municipalities with 15, 14, and 19 municipalities composing the first, second and third congressional districts, respectively (Green, et al 2002). The productive force of Bohol is almost 58% of the total population, of which around 89% are engaged in farming and fishing.  Agriculture remains the biggest sector in the province in terms working population and land use (PPDO 2006).

In 2000, poverty incidence was very high in the province - 50.2% in terms of population (NSCB 2000), affecting mostly farmers and fisherfolk (PPDO 2001). In the same year, the province was one of the poorest twenty in the country (18th out of the 82 provinces) using monetary measures as criteria (NSCB 2000).  The alarming thing was that the poverty incidence increased by 27% as compared to the 1997 base figure (ibid). Also, the United Nations Development Program ranked Bohol as 7th in its list of 20 poorest provinces in 2001 (GPF 2006).

Bohol, since then, has become a leading example of how one province can lift itself out from poverty.  Bohol is no longer one of the top poorest provinces of the country.  Economically, the province relies on tourism, more particularly on its white sandy beaches, rivers, forests, caves for economic growth and development. It has been argued that this significantly altered Bohol's growth trajectory.

By Miko Cañares
“Some people ask me why I was very quick to deliver social assistance to people during this crisis. It’s simple. I have experienced myself having nothing. I can easily empathize with what people are experiencing on the ground.”
- Atty.  Hilario “Lahar’ Ayuban              Mayor, Loay, Bohol

The COVID-19 crisis that plagues the world is impacting adversely every sector and every individual globally. In the Philippines, the rate of infection has been steadily increasing, partly brought about by the availability of test kits, and the lack of compliance with strict preventive measures. The ability of the country to combat and survive this pandemic is put to the test.  Despite the missteps on the part of the national government, local government officials all over the country have been facing the crisis head-on, with some local chief executives finding creative ways to stem the spread of the virus through preventive measures while at the same time temper the economic impacts on the li…
1 comment
Read more

By Miko Cañares
I met Bishop Abet Uy for the first time online.
Some three years ago, at the suggestion of a good friend of mine, Fr. Harold Anthony Parilla, I sent Bishop Abet a direct message via FB messenger. He replied, within a day or two and told me how I could proceed with something I wanted to do.I did as was instructed, and some few weeks later, he sent me, via messenger again, a thank-you note.
Such tech-savviness impressed me, especially for a prelate his age. I was not surprised that some weeks later, I learned that the Bishop was using social media to spread God’s message, in very accessible terms. I also personally witnessed events he presided where online footprint was created almost in real-time (or at least a few hours after the event concluded), making us aware of where he was, what he was doing in building God’s Kingdom here on earth.
Currently, his various Facebook accounts have thousands of followers (Teba Yu has 11,744 followers, Abet Uy has 63,337, while the Bishop Abet page h…
2 comments
Read more

By Miko Cañares
- Full disclaimer here – I am a huge Joseph Gara fan.
I saw him for the first time in a wedding party of a dear friend, unmindfully singing as guests were entering the ballroom of a hotel. Apart from his guitar, he was his own prop, tucked neatly at one side of the stage, almost unseen as a massive bouquet of giant white lilies and carnations stood beside his guitar stand.Right there and then I thought that this guy would go places, because it was quite clear that he liked his music, and while he sang covers of popular acoustic ballads, he seemed to claim them as his own, making the music sound fresh, and the words as if they were freshly minted.
I am an avid spectator of his shows – at South Palms Resort,one of our favourite staycation spots in Bohol, where he seemed to be a regular; at the many weddings that he was contracted to serenade; at the many cultural events in the province where he was a part of or was the sole reason for its convening.I also follow his Spotify releases, his Y…
Post a comment
Read more