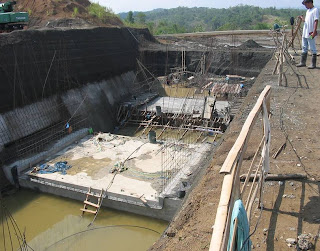 I thought then that to be proactive was always desirable.

Bringing an umbrella in London even without a “rain forecast” is always a good thing, because even the weather bureau at BBC fails to predict weather conditions a number of times. But it is another story when you wear winter clothes in Bohol because you anticipate that the snow would come any time of the day.

Call that insane proactivity, if you like. But it is how government is run sometimes in this part of the archipelago. You build a dam and then wait for the water level to rise (reminds me of that bridge that never gets finished because it would destroy an-age old church).

This October, President Macapagal Arroyo once again visited her favoured Bohol to officially inaugurate the Bayongan Dam, completed in controversy as it exceeded its 2.3 billion project cost by 52% (Bohol Chronicle, 14 October 2007). Despite opposition from farmer’s groups because of the project’s effects on the environment and its uselessness to address agricultural productivity due to insufficiency of water source, and despite the studies that indicate projected failure of the dam to service all of its intended beneficiaries (Bohol Chronicle, 10 October 2007), the project was completed and inaugurated two weeks ago.

NEDA technical evaluation showed that the dam will only be able to service between 50-65% of the 4,900 service area. The said evaluation also mentioned the dam’s dependence on the excess water from the Malinao Dam (which unfortunately also was not able to meet its service expectations) to be able to meet its own service projections. At the surface, it would seem that a dam was built hoping that very soon the water would rise, an assumption that is built within a context of an inevitable climate change (for which Al Gore was awarded the recent Nobel Prize, what a good way to reclaim fame!). Good if it is only like winter clothes that do not cost much and can be taken off when the snow wouldn’t come. Unfortunately, the Bayongan Dam was the country’s most expensive so far, and will be a relatively permanent fixture in the next ten years or so (not unless government will be able to pay its debt and acquire another one again to destroy it).

If development is to be equated with roads, dams, and bridges, then Bohol has every reason to be awarded for excellence. But infrastructure development does not always make poor people richer. In some cases, it’s the rich who get richer, and get awarded for it.

Anonymous said…
This reminds of that old joke about a certain aspiring politician who wooed voters by promising to build them a bridge (or dam, in this case) to cross if he wins. When the people asked him why build a bridge when there is no river in their place, he simply replied, "So we will build one, too!" Our politicians are always quick in coming up with solutions even if there is no problem in the first place.
8 November 2007 at 14:07