Pack Your Bags and Move On 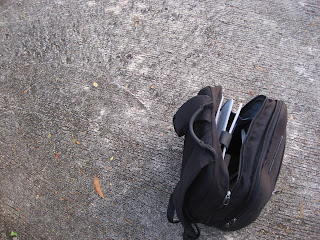 I have difficulty packing things up for a trip, especially when going back is not an immediate option. Last January 2, leaving for Bangkok for the second half of my temporary UN assignment was a difficult thing to do, especially because I have to, again, borrow time from my son and wife with whom I have not spent much time for the last couple of years.

I tiredly dragged my luggage towards the airport gate and the more I moved the heavier it became. I thought to myself that this could possibly be the kind of experience public officials have on their last term of office. They are caught in a dilemma of whether to stay on or to move ahead. Staying does not necessarily mean standing up again for another re-election, since this is entirely unallowable under Philippine laws, but fielding in one’s wife, father, sister, brother, mother, cousin, aunt, or what have you, to run for the post one is presently occupying and running for another post, either lower or higher, depending upon one’s capacity and clout. Moving on is simply saying goodbye to the post, permanently or temporarily, and letting somebody else have the experience of handling local politics or giving a chance for the populace to experience another brand of leadership.

But I believe some politicians in Bohol do not experience a dilemma, because the figures show that oh, how they loved to stay. A mayor ran (note: “ran”, and not “served”, as what they usually say) for nine years, asked his wife to run the town for one term, in order to come back again for three terms more. A provincial legislative body member ran for barangay captain with the intention to win in the league of barangays elections so that she could automatically have her seat back in the provincial board. In one town, the husband was once the mayor, then her provincial board member wife took his place, then his Sangguniang Kabataan chairperson son replaced her after her last term while she moved back to becoming a provincial board member again.

The list can go on and long and research on this theme would probably reveal how the structures of power in the province are dominated by the same powerful surnames and clans. But what struck me most is how people, the voters, can go on endlessly joining this parade, how they can allow themselves to just become perpetual victims to this shameless insult to their political sagacity, and how they allowed themselves to become mere stamping pads of somebody else’s desire to run local governments on a dynastical fashion and earn whatever economic and social favours such an arrangement would bring.

I am worried by the fact that the province’s SK federated chairperson studies in Manila while supposedly organizing her office in Bohol and attending provincial legislative sessions in between. I do not underestimate capacities here, or devalue the power of technology – emails, video conferencing, and text messages – in running the world’s greatest businesses. But it is just plainly unthinkable how one can survive in this kind of arrangement, much more function well.

I sound this challenge to the current provincial SK chairperson, who succeeds her sister in the post, to effect a change in the pervasive apathy of the young in the province, without relying on executive secretaries, administrative assistants, OICs, her father congressman or whoever to do the job. I also sound the same challenge to the current league of barangay’s chair to animate the basic political units in the different municipalities in the drive towards good governance and poverty reduction, and establish a legacy that she might have been unable to do while she served the provincial board.

More importantly, I sound the same challenge to all families running the province’s local politics to forego personal gain and work for equity and social justice and for improved standards of living and moral health of the populace. If their stay in power had not steered their constituents to that direction, then I think its time for them to pack their bags and move on.

Anonymous said…
This is indeed one of those moments when I wish more than many of us are onion-skinned as to feel the charring heat of this message and burst with the feisty resolve towards change and social transformation... but alas... such lofty words. Besides the fact that most of us who read these kind of blogs are (I wish to suppose)from among those who sincerely long for change (the one less travelled), those who we beg to join us in this march have become jaded from all these imploring... as in a line of a poem we used to recite back in high school... stolid and stunned... yes... pabutanga-bungol-as we say i our own tongue...
10 January 2008 at 08:51

Unknown said…
The problem lies within the voters who chose to belie the fact that politicians have used them (I did not vote!) time and again. And most voters who elected "the" politicians are the ones wallowing in poverty.
12 January 2008 at 00:12

Unknown said…
I am 26 years old now even once I did not practice my rights to vote! .... "kay MAKA-maulaw oi cge lang pangako pero walay agi"

Anonymous said…
sad to say i'm one of those "have become jaded" as REG mentioned...last election i was having nth thoughts 'whether to vote or not to vote'. coz i thought that to do so would be futile...but then, i decided to exercise my right to suffrage...voted only those whom i think deserves the 'seat'...i reached a point that i was about to give up. but hey, if all those 'concerned people' who've been longing for the much 'elusive change' will give up, then what will happen to our country? let's continue fighting...who knows? maybe 5 - 10 years from now, we'll finally rejoice and say that all our efforts have not gone awry...
20 January 2008 at 02:26