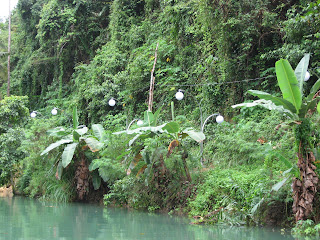 I was with my family on a river cruise in the famous Loboc river when our boatman and tour guide Joseph made striking remarks and critical questions that every person thinking about development, whether in local, national, or international spheres, must ponder on. Joseph, to most of us in that brief boat ride, embodied every soul that is forcefully and unjustly included in the ‘development’ process, and even those that are, without choice, excluded from its supposed benefits.

“I used to walk along this riverbank to be able to go to school. I come from a barangay near the ‘busay’ (the waterfalls) that we are about to see in a short while”., Joseph told us as we were cruising the river upstream in a motorized banca (boat). “I am the first person in our village that finished high school. Maybe it’s our poverty condition that prevented most of us to go to school, or just the plain difficulty of walking along this river especially during the rainy season.”, he continued. He mentioned that most of the people in his village rely on farming and firewood gathering as means of livelihood, the latter being prohibited by local authorities due to its supposed effects on the environment. He further told us that it was only recently that they were able to have electricity, thanks to the project facilitated by World Vision.

Joseph pointed to us a new addition to the riverbanks he used to walk on. Surprisingly, these were electric lampposts erected very close to river. He commented that these were a perfect mismatch to the scenic appeal of the river and would halt the firefly watching tours that they normally conduct in some select evenings. Besides this, he also pointed out its impracticality, as the Loboc river is noted for its frequent flooding during the rainy season, which increases water level to as high as four feet beyond the normal, just enough to reach around 40% of the height of some posts.

He said that the lampposts were donated by a certain Mr. Chan, a Chinese investor, and were part of the project of the current mayor to illuminate the river banks during the evening and facilitate the evening river cruise. He however questioned the motivation of the donation, as he opined that businessmen, especially Chinese, normally do not put money for plain selfless reasons. “Those mountains (referring to the mountains serving as majestic backdrop to the waterfalls) have many caves. Caves are rumoured to have treasures. Some people might be after them.”, he sadly remarked.

As we approached the ‘busay’, he pointed at one of the cottages in the riverbank near his home, where around 50 people wearing green shirts and carrying ukuleles congregated. He told us that this was the first riverbank entertainment organized by the local people to participate in the booming tourism business and help improve local economy. But two other groups downstream were organized, heightening competition, and even creating conflict between an influential person in the town and a tour guide.

Joseph presented us with a lot of implicit questions through his narrative, with hardly any answers. “Why did it take too long for us to get electricity and too fast for the lampposts to be erected? What role do local people have in the tourism program of the local government? Who is benefiting largely in this tourism business? How do we increase access of local people to education and other basic social services? Who protects local interests when these are threatened by foreign prospectors?” To me, these questions are very important in every community’s pursuit of local development.

Sadly though, one very important question above all else is “Who is hearing Joseph?”

Ryan Macalandag said…
This is so true. And sad at the same time.

I have been waiting for someone to write about the plight of the Loboc River as it is literally being plundered into destruction by the very people tasked and chosen by the people to defend it.

It is not an uncommon sight anymore to see one too many boats plying the river on any given day. And now this so-called "night cruise". What a stupid idea and I hope stupid ideas like these don't necessarily have to come from stupid people. (Remember the bridge to nowhere and the useless and utterly ugly boat docks?)

What made this article inspire me to comment is the fact that it involves a "local ordinaryo" who actually sees this "development" bullshit for what it really is.

Anonymous said…
our experience with joseph has not missed your analysis, hehehe

Anonymous said…
for once this particular issue came out in a Bohol newspaper (Bohol Standard "Death of a River"), front page at that... cruising on the loboc river will never be the same...
27 May 2008 at 11:28

Are you from the Philippines? Is there anything positive about the country that BoholAnalysis publishes? Please share it with me at this email address: marc_inno@yahoo.com

Unknown said…
First time to visit Bohol early this year and it was an amazing experience. Being born in the Philippines, I've talked to some of the locals in Bohol and they are in doubt and have a strong sentiment towards the plan of an International Airport in Panglao. Most of these locals does not want their Bohol to turn into like a commercialized and noisy Boracay resort. I wish the citizens of Bohol to have a voice and say to protect their their way of living without intrusion and corruption from their tourism industry. There should be regulations to control abusive visitors or foreigners before it's too late. Bohol should be protected from being commercialized and polluted.
15 March 2010 at 06:02