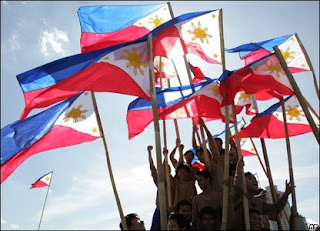 (This piece was written in 2001 on the occassion of the Independence Day celebration. It originally appeared in Panglantaw, a publication that a few souls wanted to put up and successfully printed for at least three quarters. It is amazing that after eight years, not much has changed. The lines written here, as I read them again, seemed fresh, making me think that sometimes, not much has changed, except that President Arroyo transferred the non-working holiday to a Monday.)

Today is Independence Day and like most of the people in our country, I am tempted to say “What the heck if it is?” Independence Day after all is just another red day in a calendar, another breather to a lousy office schedule, or another real day-off in an often-day-off government work. Yesterday, I watched my cousin hang a flag by the window and sensed the feeling of “its-a-requirement” air in his face. Besides, what meaning has a flag to us nowadays, except for the fact that it’s something we send off to air every Monday morning while singing that anthem that has somehow lost its meaning especially when played before a last full show at a local movie house?

Early this morning, the daughter of my landlady persistently called her brother who was still half-asleep to drive her to the city plaza for the usual then usual early morning program. And in my tiredness, I came to think of the many government employees who are forced to wake up early today to attend to those ceremonies that become more of a gathering by attendance than of a real celebration. Indeed, today is Independence Day, and whether you like it or not, if you’re a member of the government (that building, that group of people), you have to be there during the ceremony or suffer the consequence of an “explain-in-writing-within-twenty-four-hours” memo from your superior.

Answering your own questions sometimes is as hard as letting piles of thread pass through a tight needle’s eye. Most especially, the answering becomes more difficult if you are a part of the question. Like, why am I not celebrating? Why am I not in the plaza today and with all my heart sing the Lupang Hinirang to the top of my voice while proudly holding my hand close to my breast? Have I lost my belief in my independence? Have I tired myself from being a Filipino? Have I made myself believe that there’s nothing more to celebrate in a government and Government that has never learned its lessons after all? Before I went to take a bath to scrub the Chlorine water off from yesterday’s whole afternoon swimming at the pool, I heard the fish peddler cry again the usual. “Isda mo diha! Tamarong, danggit!” outside. The voice was so familiar; she has been crying that line for four years now. It struck me to think that after four years, she hardly changed, crying for her fish every early morning, every day. I remembered my friend at a theologate in Ozamis who said that every day should bring in a change to our lives in order for us to prove that we have learned from the lessons of our history. But then, she has been crying the same line, bringing the familiar basket, and wearing the same worn-out clothes for four years. Now I know why she’s not there at the city plaza celebrating with the government.

Blame not
The restless figure
Who sits by the corner
Of the sunken church
Who, with hunger in her
Stomach
Ate all her pride
And bathed herself in shame
While the rich and the mighty
Paid coins and pennies
To share the view.

Indeed, the escalating poverty in our community does not reflect the choice of the poor but the greed of the rich. Who wants to be hungry, homeless and penniless after all? The glaring poverty that greets you every morning is a menace created by all of us; by a corrupt government that fails to deliver basic services, a business sector without a social conscience, and an apathetic majority who never does anything about issues affecting people, not unless it personally affects them. Poverty is characteristics of our growing dependence. Tasing, my friend in the mountains of Malindang said once, “Ang kagawasan hingpit lang kung ang mayoriya, ang katawhan, ang masa, nahaw-as na sa ilang kakabus”. I believe she’s right. Poverty is a chain that binds one person even in his quest to attain the right to live.

Independence is a hard won achievement. Our history has proven that. Some historians and political analysts would say that the Philippine Declaration of Independence is a hoax, for after all, we are still pawns of superpowers, of developed countries that has continued to use us to their benefit. It’s a hoax, for after all, the lab-asera is still the same old lab-asera until now, Tasing is still up in the mountains, and the tricycle driver still excludes himself from the government, and the Government.

But as I look at the flag blown by the wind at the school’s pole, I see a challenge; a challenge of winning that independence, making it come true. And I look forward to that time and day that I’ll come to see everyone, including the lab-asera, Tasing and the tricycle driver, and millions of people like them, like us, joining together to celebrate real independence day.

Today is Independence Day. And it’s not a bad day for dreaming.