August 15, 2008
In May of 2007, I participated in a global exhibit of children’s art in London. The idea of the project was to present through visual art the vision of the world’s children of the future. I represented the Philippines in the exhibit and two months before that, I went home to Bohol to conduct the art workshop with children from the Bohol Crisis Intervention Centre. 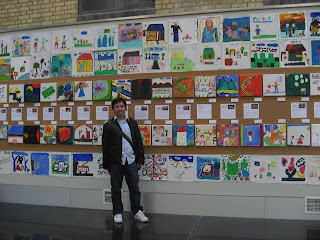 The Bohol Crisis Intervention Centre, a project jointly managed by the Provincial Government of Bohol (http://www.bohol.gov.ph/) and Feed the Children Philippines, Inc. (http://feedthechildrenphils.org/), is a temporary shelter for abused children. Since its establishment, the centre has handled more than 300 cases already. In March 2007, 37 children were housed in the centre, located in a secure compound in the heart of Tagbilaran City, the provincial capital. The centre provides housing, food, counselling, and educational support to these children as well as coordinates their appearance in court hearings. Centre officers were also active in the campaign against domestic violence and child abuse.

Ten girls, aged 7-16 participated in the art workshop. Nine of these children were survivors of sexual abuse (rape and incest) and one is of domestic violence. The eldest survivor is a fourth year high school student who was gang-raped by thieves in front of her defenceless parents while the youngest survivor is seven years old, who, together with her 8-year old sister, was sexually abused by their biological father. One of the participants was a fourteen year old child, already a mother to a one year old daughter. Most children come from poor families in the hinterland communities of the province of Bohol.

Doing KEEPS with this “special” group of children was both a sad and a happy experience. I was with my wife when I did the workshop and we were both devastated by the fact that these children, at their very tender age, underwent a very painful experience that would probably haunt them for the rest of their lives. It made us ask a lot of questions – how can parents or immediate family members do these unforgivable acts to them? What is wrong with the community where these children live that conditioned these things to happen?

At the surface, they were all normal children. But their experience, I reckoned, damaged their personhood largely. In the first few minutes when we met, they felt uncomfortable with me around, maybe because I represent the sex of their aggressor. For example, one child reacted strongly to physical touch, unknowingly, not only from me but even from her own centre mates. Another could not speak to me straight in the eye, while another one did not even utter a word to respond to any one of my questions. As the workshop progressed however, and with the help of the centre manager’s structured learning activities, we were able to build rapport and the painting session became enjoyable.

The workshop ended with them discussing about their paintings and their dreams in life. One wanted to be a nurse, and another a teacher. One wanted to build a house with separate rooms for her and her siblings while another would like to travel and ride on a plane. When asked what they intended to do to fulfil their dreams, they said they wanted to go home and go back to school and study hard to finish college. Their eyes beamed with hope as they spoke of the beautiful things that they think the future can bring. I was ashamed of myself and happy at the same time – ashamed because these children had more hope and faith in life than I had, and happy because after everything that they went through, they can still see the beauty of life.

The artworks that they made spoke of what they considered most valuable. The prevailing themes were home/family/house and school/community – things that were denied to them because of the pending cases filed for them in court. While the centre provided them distance schooling to finish their studies, as well as counselling sessions and community support, these children were uprooted from the environments where they would have had lived normal lives. The pieces were full of dark colours and phallic shapes, symbols of the painful experience that they wanted to forget.

I left the centre not only with the artworks in my bag, but also with a lot of unanswered questions in my mind. Are poor children more prone to sexual and physical abuse? If they are, what should be done? Is education and advocacy enough? If not, what else are necessary? What is the government doing to ensure that this centre will no longer have children in the future?

It’s amazing how an art workshop on a hot summer afternoon could make you ask these questions.