Where Will Tagbilaran's Waste Go? 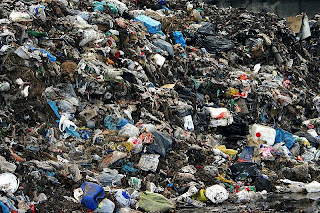 (This is an excerpt of the paper to be presented by MCanares in the upcoming United Nations University Conference in Kolkata India, 15-17 December 2008. The conference topic is "Beyond the Tipping Point: Asian Development in an Urban World. Mr. Canares' paper is titled "The Excluded Poor: How Targeting Has Left out the Poor in Peripheral Cities in the Philippines.)
In 2004, the Provincial Planning and Development Office conducted a poverty monitoring exercise to determine the levels of deprivation of every local government unit in Bohol. Tagbilaran City was part of this exercise which sought to determine the poverty condition of the barangays using a set of indicators including malnutrition, mortality, crime, disability, access to water and electricity, food shortage, health insurance, income, housing, literacy, sanitary toilet, house and lot ownership, and garbage disposal systems.

Interestingly, in the survey, all of the houses in the city were found to have environmentally-unfriendly garbage disposal systems. In Tagbilaran, until now, waste segregation is not practiced though garbage is regularly collected by government-commissioned garbage collection system. Burning of trash is still practiced in some areas, especially those not proximate to the city and household and commercial waste are dealt as one.

Tagbilaran city has an open dumping site, where the garbage, after collection, are accumulated regardless of nature. Before the passage of Republic Act (RA) 9003 (Ecological Solid Waste Management Act) by the Philippine legislature in 2000 that prohibits open dumping systems in the country, garbage collected in Tagbilaran City was burnt in open air. Now, the garbage is just openly stored in an area 3 kilometers away from the city centre, either left to rot while recyclables are collected by scavengers.

Liquid waste also is a problem to the city. The construction company hired to rehabilitate the road and drainage system discovered that there were various illegal tapping of the drainage system; illegal, because untreated water coming from the septic tanks of several establishments were channelled to the public drainage system which should have been used only for grey water.

The bulk of waste as well as grey water is enormous that it caused flooding in some parts of the city during heavy rain. The water can not just be disposed to the sea as these were not yet treated. A water treatment facility is not available and thus the big problem. The city has not yet penalized those with illegal connections and the flooding continued for a while until the city government, without the necessary clearance from the Department of Environment and Natural Resources (DENR), authorized the opening of the drainage water outfall in 9 November 2008, solving the flooding problem but jeopardizing the marine resources and the livelihood of several people.

The government of Tagbilaran has done little to respond to the alarming problem on waste management. An inter-local government unit sanitary landfill was conceptualized and currently undergoing construction. It should have served Tagbilaran and its eleven adjacent municipalities but the city government opted out to construct its own sanitary landfill facility. It has been a year and a half now since that pronouncement was made, but nothing material has turned out and Tagbilaran’s solid waste still goes to the open dumpsite.

The barangay captain of Dampas, the barangay where the dumpsite is located, expressed concern that his barangay constituents were greatly affected by the open dumpsite and requested for the dumpsite’s closure, citing RA 9003 as basis. The leading causes of morbidity of the city, and more particularly barangay Dampas are respiratory-related diseases as acute respiratory infection, bronchitis, pneumonia, and TB. Also, among the leading causes of death in the last eight years is pneumonia. This does not imply causation though but the issue deserves further interrogation, especially in a city where hospitalization costs are high and a significant number of poor people do not have health insurance.

The city government also acted late on the concern for waste water. An order for disconnecting the illegal tapping to the city’s drainage system was agreed to but not implemented. The negotiations for a wastewater treatment stalled, until such time that people clamoured for immediate action. The national government, through DENR Secretary Lito Atienza, agreed to flush the water to the sea, given the appropriate clearance from the agency. Rich people in the flooded areas acted on their own to protect their houses by piling sandbags, accentuating the flooding. Those who were not able to afford this control measure were largely affected.

It should be noted that Tagbilaran City’s main business establishments are tourism and tourism-support service providers. Unmanaged solid waste and wastewater will risk tourism-related activities, especially so that one of Bohol’s competitive advantages is its white beaches. Several hotels and restaurants are located along the coastline of Tagbilaran. Also, 4% of the population rely on fishing for livelihood. Polluting the seas will have adverse effects on marine resources, and consequently on people’s livelihoods.

It is admitted though that quantifying the risks that unmanaged waste disposal systems pose to poor city residents is a very difficult task. What this paper would like to highlight, however, is the possible repercussions of improper waste management on city residents. Eventually, those with meagre resources will be hit the hardest as their capability to respond to these vulnerabilities will be stifled by their poverty.

janiola.c said…
hi..sir, it is not related to the article you wrote, i just want to have your opinion about the increasing population in the Philippines and in the world. Is population a big problem and a cause to poverty?
thanks in advance sir..have a nice day..
11 May 2009 at 19:36

Jayden said…
Proper waste disposal in every place, city or province must be a great concern of their governments. Simple waste segregation in everyone's household is already a great start for a proper waste management campaign. environmental services
27 April 2012 at 02:41