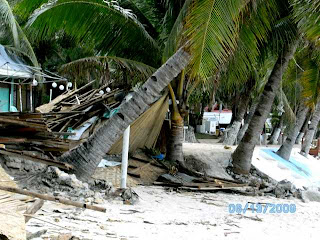 I can still remember the 1993 American film Demolition Man where Sylvester Stallone faced off Wesley Snipes in a science-fiction-war-thriller movie set in 2032. The forces between good and evil, between light and darkness, is captured vividly in the film while it puts forward the idea that one can coexist with the other even in the mind of a single person. In movies of this plot, the protagonist is always the one at the fold of the law, the one that is just, the one who asserts its rightful power against the other.

But as I write this piece, I no longer refer to that police officer played by Stallone in the movie. I refer to one person who has, after all these years, shown what political will is all about. I must admit I am never a fan of this man. I was very critical of his administration when he ‘ruled’ the island of Panglao when I was still studying university. But he is the modern-day Demolition Man.

His name is Benedicto ‘Dodong’ Alcala, three-term mayor in the municipality of Panglao in the 1990’s, slid back to head the local Sanggunian when he was no longer legally qualified to run, and now currently the mayor of the town. To an extent he is responsible for the how local politics in Panglao has been tremendously changed, not for the better though, in recent years, but now seemed to redeem his place as a worthy and respected individual in politics.

I should say I have become a great fan of him with his recent move to actually lead the demolition team in Panglao’s famous beach named after movie star Alona Alegre – Alona Beach. The demolition, rightly done as the owners of structures are violators of the 20 meter salvage zone, was conducted in the second week of June this year, amidst protests from affected resort owners as well as a collective legal action to suspend the implementation of the law. (Article 51 of the Water Code of the Philippines requires the removal of structures within the 20 meter salvage zone area).

The move was long overdue, and the Environment rightfully deserved it. Panglao can’t allow itself to be another Boracay. Besides the problem of waste disposal, more particularly the cleaning of septic tanks, as well as the lack of road access during fire and other emergency hazards, Alona Beach is losing its sand, like an old man confronted with the problem of a receding hairline.

A study conducted by Dr. Winfried Wiedemeyer, who used to work with the Tropical Marine Ecology, Fishery Biology, Aquaculture and Physical Oceanography of the Environment and Natural Resources Management Divison of the province of Negros Oriental in the late 1990s concluded that the main asset of Alona Beach, its white beach is “vanishing at a horrifying speed”. One of the human causes of this is massive extraction of sand at the beach and the putting up of concrete walls and other structures in the area that increased the vulnerability of the beach to sand erosion.

What prompted Mayor Alcala to take the axe and go ahead with implementing the full force of the law?

His opponents in local politics (who surprisingly were his allies before) said it was all politicking. They could very well say this, especially because they were one of those who also violated the legal requirement on easement. Other observers noted that he must have felt the pressure from the provincial government, more particularly from Governor Aumentado who promised to implement the law in the interest of the environment and with sufficient pressure from lobby groups. A businessman said it’s all about business. Mayor Alcala is reportedly supported by hotelier Anos Fonacier, owner of the long-standing Bohol Beach Club, a dominant player in Panglao’s tourism landscape. A close ally to the mayor said that Mayor Alcala was able to do this now because he did not have any interest anymore in running for an elected post in the upcoming elections in 2010.

But for whatever reason, I should credit the man for bravery and courage. It takes a stubborn determination to undertake what he did. If one visits the beach area these days, the remnants of the demolition operations are still evident while a few structures were still spared. To continue what has been started is still a major challenge. Paz Trotin of Bohol Diver’s Resort was reported to have gained a Temporary Restraining Order (TRO) to suspend the demolition at her property. Soon, Mayor Alcala should go on and finish the job when the TRO expires, to make the statement that no one is above the law, rich or poor, big or small.

When all these are over, and the beach area of Panglao is clean and clear of unwanted and illegal structures, we should declare a holiday to honour the man, and the countless and nameless individuals who made this critical event happen.

incendiary tey said…
i must admit, that was very wise of him to do that.

research paper said…
Many institutions limit access to their online information. Making this information available will be an asset to all.
6 May 2010 at 00:49

Anonymous said…
Congratulations to the demolition man. it was a wisdom of choice without personal interest but for the majority benefits of the people for health, life, property as well as environmental control. I WILL LEAVE THIS QUESTION: When to do if it is right and when not to do it? Always, we must have had accept change.
30 May 2010 at 04:49

Anonymous said…
I don't know the situation in Bohol, but I do know it in Bantayan, where we are dealing with this same issue. Uniformly, Filipinos seem to agree with you, tear down the illegal structures! But our situation is that until recently the structures were legal. The beach has moved further onshore, it is eroding. There is a crisis here, but it's not illegal structures. It's global warming changing the weather and wave patterns. If a structure was legal when built, does it become illegal, and the owner criminal, because the beach has eroded? Actually, I see news stories indicating that's what is happening in Panglao also. Why attack the victims? The answer here seems to be racism. Most of the landowners being attacked are foreign.
5 June 2010 at 18:06