So when do we start talking about climate change? 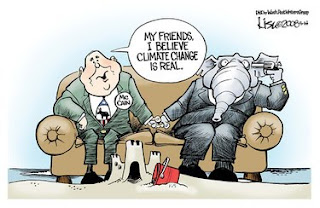 (This is an excerpt of the paper "Its Just a Buzzword from Above...." which Michael Canares presented in the most recent conference of the Development Studies Association of the United Kingdom, held at the University of Ulster, Coleraine Campus, Northern Ireland on September 2-5, 2009)

The important question to be asked then is what and how much do local leaders in the province know about climate change. Knowledge, in this case, is not just about what climate change is, its causes, and its effects, but also about the relevant means by which climate change can be addressed and the role that local governments can play. What local leaders know will affect how they perceive the necessity and urgency of climate change as an issue and will correspondingly determine the manner by which they would react.

To answer the question, a survey was conducted with local legislators (Sangguniang Kagawads) to test knowledge on climate change issues, causes, and potential solutions (n=100). Local chief executives (mayors), non-government organizations representatives, and other stakeholders (n=30) were also interviewed regarding the same variables used in the surveys. Finally, a thematic analysis of the results of the survey and interviews was conducted. The results of the study are indicated below.

First, it is obvious that not one of the local government units covered in this study has actually assessed the risks and vulnerabilities of their specific areas to climate change. It is also evident that local government units have not actually analyzed local adaptation practices in the change of climate, which is present ever since humanity existed, as societies have to adopt coping strategies to unwelcome changes in climate (Adger et al 2003). If we have to locate the scientific debate regarding mitigation and adaptation in the local context, there seems to be a hollow in the discussion, notwithstanding the fact that planting trees, for example, are processes for carbon sequestration and proper solid waste management practices are necessary activities in ensuring reduced greenhouse gas emissions. But solid waste management programs were not a response to climate change challenge but a requirement of a national legislation – Republic Act 9003.

Second, it is evident that local officials only have a very basic understanding of the climate change issue. The admission of local government officials that there is no sufficient information available for them to understand the impact of climate change on people and livelihoods, the inability of some to answer the question of what possible solutions are necessary, and the absence of climate change language as “mitigation” and “adaptation” in the responses, indicate the lack of adequate understanding as well as a shallow appreciation of the issues. While indeed they think that local responses are important, they actually do not know how households and local governments can effectively respond.

Third, while most of them felt the urgency of a climate change response, they think that there is a far serious and urgent problem than climate change that needs to be addressed, like for example, the problem on poverty. In Bohol, poverty incidence in recent statistics showed that 38% of households live below the poverty line, using conventional income measures. The provincial government mandate is to contribute to the goal of reducing poverty. While some (48%) of the local leaders believe that the failure to address climate change issues in the long run will have extreme effects on poverty condition, they are caught between the tension of direct impact programs and long-term goals.

Fourth, it is not true that local stakeholders are indifferent to the issue of climate change. There is a growing concern to respond but how this is translated to action is constrained by the lack of information on what is to be done and on the lack of resources to pursue what could have been identified as priority action steps. The “indifference”, as can be gleaned from local development plans, is brought about by a myriad of causes that speak not only of the readiness of local governments but also of the lack of support from national and global actors in enabling the capacity of local stakeholders to participate effectively in mitigation and adaptation measures. For example, Bohol’s primary economic driver is tourism which is argued to generate significant greenhouse gas emissions especially the transport sector (Peeters 2007). How the effects of these activities on the environment need to be addressed, but local capacities are wanting in terms of analysis and assessment of these impacts.

So when do we start really talking about climate change? When?

When ecological concerns permeates into our own personal system....
28 September 2009 at 04:00

Miko Cañares said…
Agree. With that, you can say, that Ondoy floods is a wake up call for the NCR. But it will not be a wakeup call for Bohol. God forbid. We should not wait for anything bad to happen to do something.
28 September 2009 at 17:28

bugsbunny said…
What happened in the metro could not be attributed directly to climate change, I should say. Well, location wise most of the metro is just sea-level...as data shows the rain's unprecedented volume causes the flash flood coupled with the almost all-concrete pavement in the area, so it happened. The rain that time was pouring continuously over the night so that there was massive land overflow and quite little percolation to the ground was evident.....with the decimation of open areas in the metro, really flash floods would be expected if heavy rains come...
30 September 2009 at 22:43

Miko Cañares said…
To bugsbunny, I am no climate scientist, so I can not actually say it is or it is not. Though I have read and listened to experts talking about climate change and the recent flooding. Of course, I agree with your later points....poor urban planning is not only characteristic of Philippine cities but also of other cities in the world.

But there is a certain abnormality in the rainfall (which you described as at its "unprecedented volume"), as well as the frequency and strength of the typhoons in our jurisdication, mentioned by some hard science commentators. So I think that has to be somehow fitted into the equation.

Anonymous said…
Maybe the most influential paper I have read today.
25 September 2010 at 21:09