Crime In (and outside) the News: Who holds the responsibility to protect? 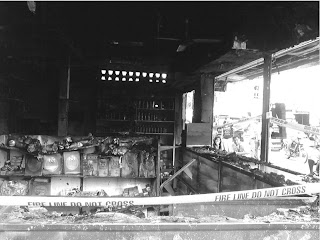 I arrived in Tagbilaran after three weeks of academic theorizing on development and inequality at Brown University.  Several news, unpleasant ones, greeted me, over a breakfast of corned beef and rice.  There was new case of burglary with arson at Paz Pharmacy, located along Gallares Streets. The Bohol Chronicle reported, on its Wednesday edition (June 22), that the pattern was similar to what happened to B and J Computer in May this year.
As I am writing this, I am facilitating a workshop in Naic, Cavite.  My wife called me, a few minutes ago that two of our neighbours experienced attempted cases of burglary, resulting to a loss of P1,000 to one of them. I shudder at the thought that Tagbilaran is no longer safe, as I still want to cling to the memory of a not so distant past when roaming the streets was not a problem at all, and robbery and burglary of this scale were never heard of.
In 2011 alone, several alarming cases happened. In January, the church of Loboc was burglarized were suspects took a priceless silver antique plate. In April, one of the barristas at Bo’s Coffee-Plaza Rizal was stabbed to death along CPG Avenue, right at the very heart of the city. In May, robbery was done at Tagbilaran Bombay Bazaar in broad daylight, resulting to a loss of approximately P200,000 to its owner Roma Navani.
These facts are alarming. What is more alarming though is the steep increase in crimes in the city, from a total of 663 in 2009, to 1318 in 2010.  But what about 2011?
Indeed, whose business is it to ensure that we, as citizens are safe? To whose hands lie the responsibility to protect? If it is the government’s business to ensure that peace and security is afforded to every resident, why have all these things happened?
It is always convenient to blame administrative deficiencies (lack of patrol cars, poor street lighting) or human resource problems (low police to citizen ratio) as the cause of the government’s failure to protect the lives of its citizens.  It is also convenient to say that every citizen has the responsibility to assist the government in the maintenance of peace and order and their failure to do so adversely affect community protection.  But when you see politicians tailed by several men with long guns and driving through the streets with accompanying patrol cars, you wonder whether an ordinary citizen is not worthy of such a high degree of protection.  You wonder whether everyone has the right to live a safe life.
Those who do not trust governments anymore erect high walls and install home protection devices.  Others hire their own security guards and protective agents that they tag along with them wherever they go.  At the end of the day, it is the poor whose life is always at stake because not only do they lack the money to buy food to eat, they also have to grapple with the fact that their government cannot protect them.
Cases of physical violence, those that threaten people’s lives and their properties, occur almost every day in the Philippines in the lives of both rich and poor. The only difference is that those that affect the rich reach the papers and deserve the attention of our local governments and the concern of our law enforcers. Those that affect the poor are oftentimes unheard.
Now I understand why Manong Titing, a good friend of mine, sleeps with a bolo under his head.  When government fails to protect, the poor tricycle driver, father of three adorable daughters, has to take the responsibility of  protecting himself and his family to his own hands.

yo said…
Nice one Sir Miko! Few years back, me and my friend could freely roam around the city even at 10pm but now, everything seems to be in danger after six.
30 June 2011 at 08:34

glenn said…
another good point of investigation Miko is whether the rising rate of criminality an indicator of a rapidly growing urbanization in Bohol, at least in Tagbilaranre amidst worsening economic conditions of the many.
2 July 2011 at 02:06

Miko Cañares said…
Yo, many thanks. Indeed. I think it depends on the area though. Some are still okay at ten to even 2 am but other areas are somewhat problematic.

Nyong, i think you are touching a very important issue there. What does the situation tell us? This is actually one of the offshoot questions of the piece. Does it tell us that urbanization (and for that matter, tourism for example) has its trade offs? Are the culprits from the outside or from among us?
3 July 2011 at 07:00

Joanskie said…
Just had a good (sad?) read of your post, Miko. And I am utterly shocked and crushed by what I have just learned! Just a few seconds back, I proudly commented on Kins' photos showing shots of the sights and the 'slice of life' of people in Bohol and now, this? What is happening?! How do I respond now to the very first question that friends & acquiantances ask (here in SG)me, "is Bohol safe?".
I guess,the answer to that now is as broad as daylight...
4 July 2011 at 20:02

Miko Cañares said…
joanski, safe man gihapon tingali siya, relative to other places. but not anymore as safe as it was when we were still younger. i wrote the piece to warn our leaders that if they do not do something now, things will drastically change in the next five years. growth (and tourism) for that matter, has its downside (e.g. crimes, prostitution, environmental destruction) that when not dealt with proactively will surely affect the way we in the islands live.
17 July 2011 at 23:07