By Miko Cañares February 15, 2012
Sunday morning at the Tagbilaran airport, and flight was delayed.  I had the chance to talk to a student of mine who works in the airport for years now.  He brought my attention to this counter near the exit door of the check-in area  that has a wide sign bannering RA 8550 and a collection of pictures of seashells. 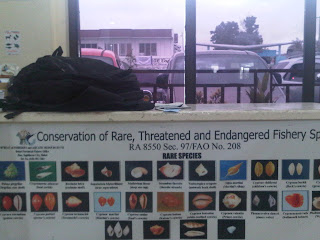 RA 8550 is no stranger to me. My sister who is a marine biologist and foreshore management specialist is one of its staunchest advocates that even my mother would take extra care in buying fish as these may still be too young to be caught or are spawning or are taken from the sea by fishermen using fine mesh nets. The law provides, among other things, the reconstitution of the Bureau of Fisheries and Aquatic Resources, the specification of allowable fishing in municipal waters, the power of the state to prescribe non-fishing seasons, and the participation of communities in monitoring of fishery laws.
What the wide banner and the counter represents, is the effort of the government to ensure that Fishing Or Taking of Rare, Threatened or Endangered Species (Section 97) which includes aquatic plants, animals, including some varieties of corals and sea shells in danger of extinction (Section 4, par 17) is curbed as this is considered unlawful.  The law provides that violators the provision shall be punished by imprisonment of twelve (12) years to twenty (20) years and/or a fine of One hundred and twenty thousand pesos (P120,000.00) and forfeiture of the catch, and the cancellation of fishing permit.
The counter is supposed to be peopled by personnel from the implementing agency tasked to apprehend and confiscate illegal gathering of these endangered species.  But on that one fine Sunday morning, the guards can not be seen!
Maybe no one is there because it is a Sunday.  Maybe no one is there because the person assigned is sick or had problems getting up in the morning or whatever.  But this means that the government  missed the chance to apprehend whoever it is who had the intention to bring out of the province prohibited items.  Thus, for one with the bad intentions, they only have to do this on a Sunday, as the guards are not around.
I remember the commentary of Sen. Loren Legarda in September 2011 that what the country really needs is effective implementation of the law when asked if there are certain environmental laws that she would like to see passed in the legislature.  In the same vein, Greenpeace reports in June 2011 that what is sorely lacking is the “implementation of our environment laws and environmental resource management”.  It can be remembered that in the second quarter of 2011, the Philippine Bureau of Customs uncovered a plot to smuggle P35 million worth of black corals, stuffed endangered turtles and other marine species out of the country which lead to the seizure of a shipment of black corals in Cebu estimated to be over P15 million.  Had the corals been transported from Bohol that Sunday morning, no one would ever know.
I asked my student if the personnel at the desk were able to confiscate some items from passengers during when they are there at the counter and he said yes. I asked him what they do with it and he said nothing. Indeed, when I looked at the back of the counter which unfortunately is accessible to anyone, I saw plastic bags there of confiscated items with some of the shells actually naked, unguarded, and helpless. 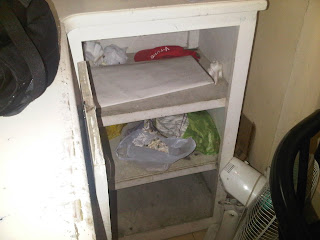 What I saw really struck me as the sheer irony of it is appalling. Yes, you have a law. Yes you have guards, and when they do report to work, they do their duty. Yes, you have confiscated rare and endangered species and then you just left them there.  I can’t help but think that such a counter was just all for show.
When one foreign tourist had one of his shells collections seized from him, he just said “alright”. But had he known that all that was taken off him just landed in that counter he could have made a strong argument.
And so I thought it was just all about invisible guards.

Anonymous said…
thank you for sharing miks... this reminds me of a project we had with the Aetas in Boracay. when i went to monitor them, i discovered that the raw materials they are using for their burloloys and lamps are the big conch shells. they have rows and rows of these shells in their workshop. the Vincentian Sisters who are assisting them claim that the shells were donated to them. One time, while bringing samples of lamps to Cebu, the sister was stopped at the airport but since she was a nun, she was allowed to go and her lamps were not confiscated.

the law is not implemented. these counters exist but there are no guards at all. they are not just invisible, they do not exist at all. as useless, the DENR is not doing its job.
16 February 2012 at 07:28

manongpawikan said…
ouch for me. makes me re-think how we implement our programs. one thing too. it is not only the people that gets frustrated in a situation such as these, we too, workers in government.
16 February 2012 at 17:00

bagi said…
hay naku miko, i agree with john...so many bills filed, so many laws passed each year, so little implementation and others still pending...i get frustrated at times (hahaha! most of the time diay) when i'm asked to check out bills that we want to co-author or research on issues that we ought to make a bill/resolution coz i know despite our efforts, it will be futile :( getting lazier every month...have pending issues i was asked to research but ... :( SIGH...
22 February 2012 at 19:56

Anonymous said…
In most cases, a staff from BFAR peopled in this area to inspect baggage if it contains marine species declared as endangered under the CITES or the RA 8550... I asked BFAR-Bohol, a month ago to request technical support for a training, but they said they could grant our request depending on their availability, since their office is also under staff. I am sure if one will ask BFAR, why nobody's around the help desk, I am pretty sure they would have the same answer. The same old response.
22 March 2012 at 23:12