How do you help the Boholano farmer?

Since economic reforms started to be implemented in developing countries in the 1980s, there has been a vigorous debate over the nature of the changes brought by market liberalisation and de-regulation, and over their results. As the debates over ‘getting the prices right’ and ‘appropriate incentives’ subsided by the early 1990s, the discussion moved towards, on one hand, the discussion of the role of globalisation in economic restructuring, and, on the other hand, of issues of institution building and good governance. Generally, the literature has focused on issues either at the international, regional, national or sectoral levels. While these debates have generated key insights, relatively little has been said on commodity-specific dynamics of change and on the possibilities (and the limitations) of economic upgrading for developing countries offered by specific markets.


In local economies as Bohol, while there were a lot of discussions and interventions in the sphere of agriculture, initiated by the government, the non-profit organizations and even the private sector, not much has been said and written on the manner by which commodity flows to and from the hands of farmers.  While much of the interventions focused on increasing agricultural production through the introduction of proper technologies and even providing agricultural input assistance, little has been made to analyze the dynamics of commodity chain - from input suppliers to output buyers – to be able to understand as to whether or not the farmer, to whom interventions were directed at, actually profited from his work in the farm.

Back in 2004, I conducted a study in the town of Sierra Bullones funded by the Soil and Water Conservation Foundation.  The study attempts to respond to the need of a data-based commodity analysis that would propel the discussion of appropriate interventions in the field of agricultural economics.  The study, to a large extent, attempts to characterize economic relationships between three players – the farmer, his supplier of agricultural inputs, and his buyer of agricultural outputs with specific emphasis on the movement of goods vis-à-vis price and the related value adding activities of the players in the process.  The particular interest of the study is on transfer prices from one player to the other and as such, it becomes inevitable to include as part of the analysis, the suppliers of the identified suppliers, or the buyers of the identified buyers, in order to deepen one’s understanding of the chain. Samples of the diagrams developed are presented below: 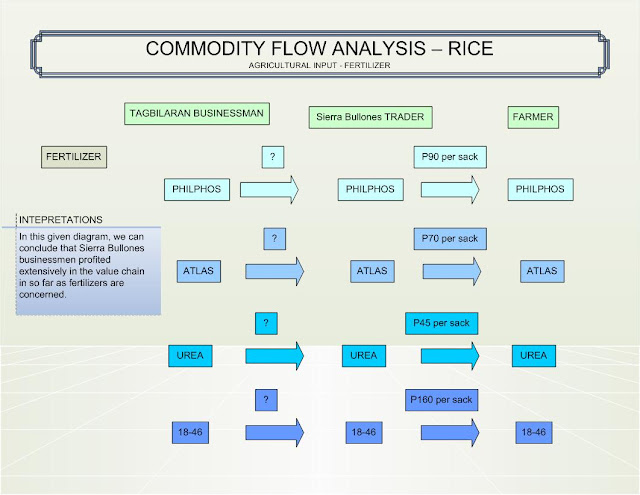 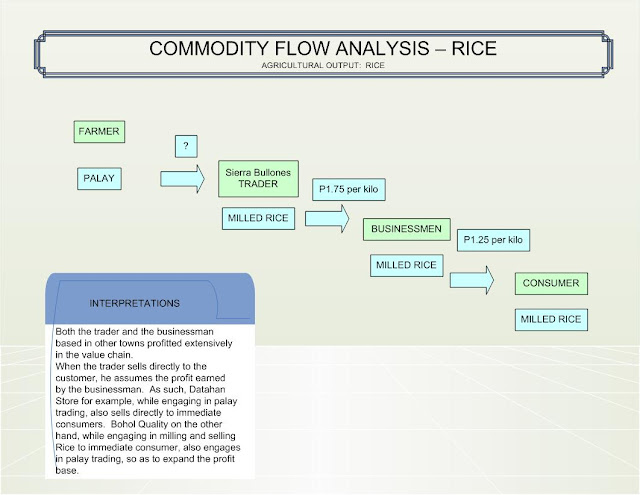 The above graphs show one basic fact; that while the Boholano farmers are the ones tilling the fields and producing the basic agricultural commodities, they are not the ones actually earning the largest profit.  In most cases, their capacity to earn is dwarfed by the middlemen, whose economic power in terms of financing and access to the market facilitates control over farmgate prices.  For lack of alternative and the need for money for sustenance, the farmers are forced to sell their produce to middlemen, though how oppressive prices are.

In the communities subjected to the study, people’s organizations in the form of cooperative or association, have been organized to serve a handful of purposes, one of which is access to capital for agricultural activities.  However, while this intervention would yield productivity, it does not ensure improved earning capacity of the farmer, especially when he does not have control of the prices of his agricultural produce.

The prices of agricultural commodities are not controlled by the farmer. These prices are controlled by an artificial market – that of the trader, whose buying strategies are mandated by his desired profit in the purchase transaction.  In which case, it is pointless for the farmer to account and accumulate his costs on a per kilo of output, since in the rules of local trade, this is immaterial.  While the costs may be high, considering all actual costs (like fertilizer and pesticides) and imputed costs (like the costs of household labor), the farmer can not make use of this to apply a cost-plus pricing strategy (total costs plus desired profit equals selling price). This is because of the fact that the buyer dictates the price, and if he refuses, re runs the risk of not having his produce sold, in as much as there are other farmers like him who are willing to sell at the trader-dictated prices.

In the past, the community-based organizations have already embarked on some initial steps in addressing the problem.  Some cooperatives have already started going into palay trading – buying member-farmers’ produce at a higher cost and selling them afterwards.  This initial but bold strokes can be extended further.

Marketing and business models have repetitively emphasized that the goal should be revenue maximization and cost minimization without sacrificing product quality.  Revenue maximization gives us a lot of options, one of which is to shorten the gap or the chain from the producer to the consumer and eliminating the middleman or the trader position in the value chain.  Doing so would mean that the middleman’s profit will now be enjoyed by the producer.

This role replacement is however, not a very easy thing to do.  For one, the farmer must possess the capacities of the middlemen.  He must have the business acumen, the entrepreneurial drive, not just a sense of contentment or a deeply ingrained “bahala na” value.  He must have the financial capability to finance business transactions and the leverage to wait up for profits patiently when they do not yet come.  He must have the appropriate networks and a strategic positioning in the poblacion-centered economy.

It would appear then that no single farmer could possibly realize role replacement. Even a barangay-based cooperative will have a difficulty.  It is in this light that a new scheme needs to be developed for the purpose of realizing the goal of greater economic empowerment for the farmer.

The time has come, for the government to start looking beyond production and fix the market inefficiencies that impoverishes the Boholano farmer all the more.

glenn said…
it could have been a help also Mik if you have also gathered information of who are the personalities of these so called "middlemen". thereby... at the end part of your piece, we could specifically target who to ask 'to start looking beyond production and fix the market inefficiencies'.... otherwise mamuti na lang atong kalimutaw on waiting for this 'government' to act after knowing the middlemen are also the ones sitting at the highest chairs.
1 November 2012 at 04:15

Anonymous said…
I appreciate your articles and posts on this blog. I read all of them because some are gems. But it gets old fast. I hope you feature something not too academic once in a while. Spice things up a little, maybe even gain a few more readers.
1 November 2012 at 06:01

Miko Cañares said…
Naay data niyong. Pero ang lisud lang kay way moconfirm sa data. The big players do not allow themselves to be interviewed so we just did a work around. Pero i think you are right. There will always be a reason why businessmen gets politicians indebted, because that is where they will win their battle.
2 November 2012 at 19:03

Miko Cañares said…
I really enjoyed this comment. Thanks. Well, it could be a reflection of who is the one writing this, an academic that is aging fast.....:). At any rate, I would appreciate suggestions on what to write. So how do you think I should be able to spice it up, without veering away from what the blog is all about?
I really enjoyed reading others blog, when they turn the serious into something insightfully funny. But then I do not have the writer's skill to do that stuff, though I enjoyed them much.
2 November 2012 at 19:07

Anonymous said…
bitaw Mik... surely I am always excited everytime a message prompts in my yahoomail that you have a new piece... karon rapud ko nakaamgo as what anonymous refers to above, nga murag bug-at piri atong dughan kada blog.. hehehe (in a positive way ha) what about your personal local heroes then? dead or alive gud.. lingaw man gud basahon nang mga anecdotes and mga success stories sa mga familiar/kaila nato... sure writer's skill is not a question nimo.. -inyong
4 November 2012 at 00:24