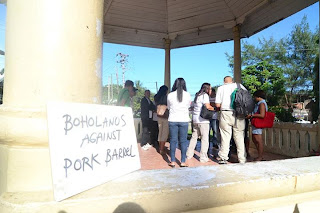 26 August 2013.  Netizens called for a million march against the Priority Development Assistance Fund in Manila.  Commentaries on the Manila march said that the crowd gathered there was short of the million it promised. Elsewhere in the country, similar activities were also held.  Video footages of the activities happening elsewhere, in Cebu, Davao, Iloilo, and other major cities and even in Australia and in the US were shown.  Maybe I missed it, but I did not see Bohol there.

I was in the Bohol march, together with my family. Friends and acquaintances from different organizations, ideologies, profession were there - Marianito Luspo of HNU-CCAD, Jean Darunday of BONACONSO, Alvin Acuzar of BUSWACC, Emmie Roslinda of PROCESS, Engr. James Uy of HNU College of Engineering, artists like Ric Ramasola and Sandra dela Serna, women activists as Regina Estorba Macalandag and Doris Dinorog were among those gathered around 10 pm that day. Quite the usual suspects, I should say.

Venue was plaza Rizal and we were there at the kiosk, several others scattered surrounding it.  If all of us went inside the kiosk, the place will not be full.  My best estimate was, only half of the place would be filled.  You can guess now why it’s not worth a video coverage in a major network’s primetime news.  We do not have that strength in numbers.

Both the Bohol march and the Manila gathering, suffers the same fate – underrepresentation.  If the population of Metro Manila is close to 12 million (NSO, 2010 estimates), then the crowd gathered there was only 3% .  And if the population of Bohol province is 1.2 million (NSO, 2010 estimates) then those of us who were there represented only 0.003% of the provincial population. This is beside the fact that those who were there did not represent the broad categories or classes of people in both the Metro Manila and the Boholano society. What makes the Bohol case interesting and uninteresting at the same time is that the people gathered that day were so few that it could not represent a serious threat to power.  Calls for accountability, for transparency, could easily fall on deaf ears.

I will not attempt to answer the question why a lot of people were not there in Plaza Rizal, as each of us has our own motivation in the kind of choices we make in life.  I will not also attempt to answer why the Catholic Church was not there, priests and nuns that you could see in the Manila gathering, because in the first place, I did not have high expectations that they would turn up at all.  I also do not want to speculate why you do not have local political leaders there, mayors and councillors for example, or why I miss the student movements and their numbers.  But what I would like to focus instead, is why I will probably become one of those who were not there that day, why I might not turn up in future rallies, why I will just let the people in government get away with what they are doing.

Firstly, a culture of impunity looms large. In a society where even courts are swayed by corporate interests (see Vitug’s Shadow of Doubt) and where government can rationalize everything it does, including giving an aircon cell to a fugitive (see the Napoles post-arrest interviews) , to express dissent becomes useless.  If reason always sides with the money-rich, and the power-clad people of Philippine society, why do you expect that a rally in the street can do anything?

Secondly, government has co-opted the term civil-society, and has even made it its own.  I am not saying that all civil society groups are nothing, but I have seen that those who were able to penetrate government are those with the blessings of the power holders, or those that later on became subservient to it.   Government, as the PDAF case suggests, even used non-government organizations as the safe excuse for their corrupt practices (see Sen. Estrada’s comments on the utilization of his PDAF).

Thirdly, when you see that rallies do not translate to better lives of the poor even when it resulted to change in leaders (not necessarily a change in government), frustration can easily breed and take root.  It’s worse than not being heard. It’s a feeling of being fooled, because you thought you were heard but the message the powerful got was not the ones you fought for.

In a context as the Philippines, where collective action may not necessarily bring better results, the route to individualism may be easier and more rewarding.  In game theory fashion, we can say, that given the above context, participation is a kind of prisoner’s dilemma (see Poundstone 1992). If we know that the end of all our struggles is not predictable and a gain is not in sight, then cooperating or betraying the other is not important. We just go on and live each day oblivious of everything that happens around us.  As what my father would say, “die today, die tomorrow, the same die.”

Noam Chomsky in his 1993 classic “The Prosperous Few and the Restless Many” wrote that “It’s only if we all do something in a different way that we’ll all benefit a lot more.” Collective action can only bring fruit if “lots of people begin to do it, and do it seriously".  But then again, he said that our society is very much structured to drive all of us to choose the individualistic alternative.

It is to the benefit of the powerful of this country to see that we get tired of going to rallies, that our efforts do not bear fruit.  It will push us all the more to focus on our own families, our own individualistic future, because the costs of creating a better world are so severe. Attending meetings, attending rallies, will not bring food to the table, will not repair our houses, will not pay our bills, because after all the things we give up, we do not see any tangible result.  The promise of change remains a promise for eternity.

Blessed are those who have the strength to carry on. God bless this country. Mabuhi ang Pilipino!