Bohol opens up further, but are we ready?

March 3 marks the beginning of the Provincial Government of Bohol’s restrained abandonment of strict entry measures to incoming travellers. The lengthy text of the policy that you can find here relaxes the several requirements imposed in prior months regarding travellers entering the province.  Very briefly,  it just means less stringent protocols for visitors and returning residents to allow the economy to recover.

I agree that the economy has suffered significantly.  Our research, even when it only covers the city of Tagbilaran, the provincial capital, indicates that at the height of the implementation of strict community quarantine protocols, at least 5,154 jobs were either temporarily or permanently lost.  Undoubtedly, this figure was higher province-wide.  The visual signs are also evident. If you go to Tawala, that tourism strip in Panglao Island, on a Friday night, the area resembles a ghost town of dark and closed buildings, save for a few establishments which managed to remain open.

Bohol’s main economic driver is tourism, along with its forward and backward linkages.  At the height of Bohol’s tourism boom, the number of service establishments catering to the tourism sector has dramatically increased.  Even as early as 2004, researchers from the Philippine Institute of Development Studies concluded that what fuels the growth of the city of Tagbilaran was tourism.  Though the tourism impacts are less felt by the poor, it nevertheless provided local employment.  Opening tourism further, as a policy option, is a no-brainer.

But first, let us answer the question of whether there is a reasonable basis for relaxing protocols. Below, we present the graph of confirmed COVID-19 cases in the province from March 2020 to February 2021, produced by the Department of Health, Bohol Province. 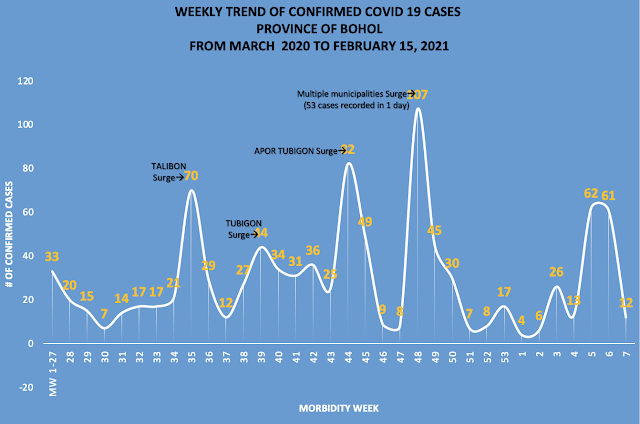 We analyzed the news articles published within the week of the reported surge in cases, and this is what we found:

a.     Several peak points in the graph, expectedly, are brought about by people from outside entering the province.

In the run-up to the first recorded surge, labelled in the graph as Talibon, Bohol Chronicle reported that all of the cases prior to this observed increase were of locally-stranded individuals who arrived in the province.  However, the additional 15 cases recorded that week were composed of 6 community transmissions, indicating that the virus has already circulated locally.

b.     That week when Bohol recorded the highest number of cases, news articles focused on several instances of protocol violations, limited opening to tourists, resumption of local travel, and travellers arriving in the province from elsewhere.

These news articles included the:

a.     Opening of Panglao to tourism using what was referred to as “tourism bubble”

e.     Resumption of commercial flights at the Bohol-Panglao International Airport

f.      27 recruits of the Armed Forces of the Philippines, coming from various localities in the country and attending training at the Camp Lino Chatto in Tubigon, tested positive for COVID-19 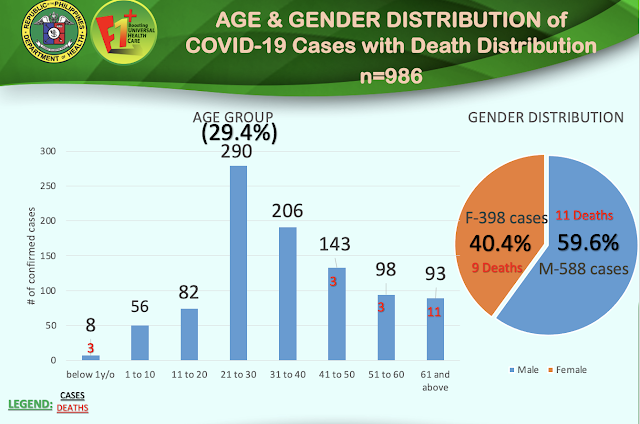 Of the total number of cases, 76.2% are asymptomatic, indicating that there is a high possibility that carriers of the virus are outside but are not tested, especially so that 73% of those infected are highly mobile age groups – from 11 to 50 years old.  The scenario that more will be infected in the coming days (God forbid) is not remote.

Given that transmission of the virus is caused initially by incoming visitors and returning residents, relaxing entry protocols may be a dangerous option. However, arguing for a deliberate and gradual reopening is already water under the bridge because the decision has already been made.  The next important question, therefore, is – are we ready for a surge in cases?

For sure, we have limited treatment capacity.

In April 2020, it was reported that the province has 936 beds available in 76 isolation units across the province.  Two months after, when we conducted an inventory of hospitals in Tagbilaran city and its bed capacity, we found out that we only have 740. Even if we add to it an estimated 574 beds in private and public hospitals across the province, we will end up with 1,000 people per available hospital bed.

We also know that only the Governor Celestino Gallares Memorial Hospital was designated as COVID 19 central treatment center. With its 250 bed capacity, it is grossly insufficient to handle a surge in critical cases, especially so that not all of that capacity is dedicated to COVID-19.

So, what options do we have?

Putting our hope on vaccines is not feasible. Based on recent estimates, it will require at least 64 years to inoculate the targeted 70 million Filipinos.  Using an online vaccine queuing calculator, I can expect to get my full dose (2 out of 2) by 19 June 2022, using an optimistic scenario of inoculating 1,274,980 persons per week.  At the current state of things, this vaccination rate is hardly possible.

It does seem that we only have ourselves to rely on.  The government has already decided that the economy needs to reopen. Even the Acting National Economic Development Authority Secretary Karl Chua already advocated for the gradual reopening of schools, expand the age limits of younger and older people currently restricted from leaving their homes, and even increase the number of people allowed in public vehicles.  But recent evidence shows that Manila has seen a surge in high cases, prompting experts to suggest “localized lockdowns and stricter border controls”.

We are not yet in a situation like the cities in Metro Manila.  We cannot also afford to be in one.  So we need to be mindful of our behaviour to control the spread of the virus.  We should avoid congregating in closed spaces. We should always wear our masks. We need to limit social interactions. We restrict our children and elderly from leaving our homes. We avoid and prevent all situations where the possibilities of local transmission are high.

This pandemic is far from over, I am afraid.

(Thanks to Tet Pepito for the additional research work.)