Reviving the Insurgency Narrative in Bohol: Who Benefits? 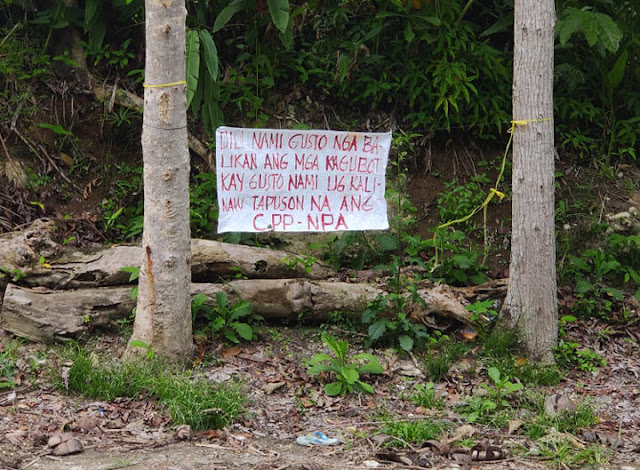 Recently, one cannot help but notice several anti-insurgency slogans painted in red letters on white sacks, hung conspicuously in public places in the province.  I have seen a few of these, even near the Dauis Plaza.

It feels bizarre, to say the least.  Dauis town, for example, is a tourism destination and have not been considered a hotbed for communist insurgency historically.  Seeing these slogans can potentially scare tourists that tourism stakeholders are trying to lure back and visit the province.

Vice Governor Rene Relampagos echo this concern during a meeting of the Regional Peace and Order Council in March this year.  It was reported that the vice governor sought clarification from the Philippine National Police, which identified Bohol, along with Negros Oriental, as the region’s “red” areas.

In his response, Regional Intelligence Chief Police Lt. Col. Robert Lingbawan said that the “red-tagging” is caused by “monitored recovery efforts of the community terrorist groups (CTGs) with the presence of armed groups in two municipalities”.  Two out of 47 municipalities where CTGs, composed of the Communist Party of the Philippines-New People’s Army (CPP-NPA), and the National Democratic Front (NDF), seem too small for the red-tag.  And by the way, Dauis is not one of those two municipalities.

It does seem that these days, red-tagging is high on the government’s priority agenda.   Red-tagging, “a tactic whereby individuals are labelled as communists or terrorists – often without substantial proof -  is being increasingly deployed by government supporters and state officials in the Philippines”.

And the bizarreness does not stop there.  Recently, as a response to the hardships brought about by the COVID-19 pandemic to several sectors of society, kind-hearted volunteers set up community pantries, where people can donate and take goods from, as a form of solidarity.  Apparently, even community pantries were targeted by the NTF-ELCAC, labelling them as sites for “communist propaganda”.

It does seem that the government has targets for the number of initiatives, people, and organizations that they can red-tag. Talk about efficiency in performance measurement.  Probably, Bohol stakeholders have the same target as well, thus this desperate move to red-tag the whole province even when there are only two municipalities where CTGs are reported.  I just hope they have not started with identifying personalities that they can label, even without basis.

Because we know that red-tagging is dangerous.  It has, by recent count, led to the death of at least 78 people who were red-tagged by the government or other actors.  While Defense Secretary Delfin Lorenzana calls the list that purportedly came from the AFP Information Exchange Facebook page an “unpardonable gaffe”, it has already endangered people’s lives.

One cannot help but wonder who is to gain in this recent effort to revive “insurgency narratives” in Bohol. Indeed, it will not be tourism stakeholders.  As pointed out by Vice-Governor Relampagos, this will likely harm the province’s efforts in tourism promotion.   The province is already battling with rising cases of COVID19, destroying traveller confidence. Adding the red label will do more harm.